In Europe, the social division into classes was still in existence until the 20th century:
“Public prerogatives or disadvantages of the birth or the stand shall be canceled. Addenal names are only a part of the name and may not be lent. “(From: Constitution of the German Reich, August 11, 1919)

For a long time, the customary order of society was based on the classification of the European Medieval Period:

It was not until the middle of the eighteenth century that the foundations of the society of the estates came into motion.

However, the music as a social art form usually followed the anti-hierarchical path. All the court-dances of the 14th / 15th century were original folk dances had been borrowed from folklore and the lower classes.
The highly stylized court dances formed an essential part of the stiff court ceremonial, but they originated in the popular culture, the customs of the lower classes.

With the program “hullygully”, zeitgeist devotes its work to the music played by the common people and its later form at court.
The ensemble illuminates melodies of the ancient music from various social-historical stands / points of view.

“Rest yourself where there is music,
Evil people have no songs. “
(Volksmund, cf. Seume, Johann Gottfried: The Songs, 1804)

For the program zeitgeist Hullygully, we could win the gifted gambist and guitarist Daniel Pilz:

Born in Vienna, grew up in Regau, Upper Austria. 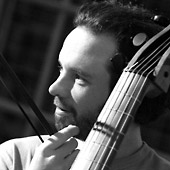 Daniel Pilz played CD-recordings in the ORF Edition Early Music, for the German Harmonia Mundi, Accent as well as for the German Grammophon.
Further, he has been and still has been in theatrical productions, e.g. “Mater Dolorosa” with Michael Niavarani in Globe Vienna, “Der goldene Apfel” at the music festivals Potsdam Sanssouci and Agathes Wunderkoffer with Veronika Mandl in the music club “Mater Dolorosa” at the Vienna Music Festival Vienna, “Richard III” and “Romeo & Julia”.

Daniel Pilz is a guitar teacher at the music school St. Andrä-Wördern and is dedicated to the teaching of a broad range of musical styles.

He lives and works in St. Andrä-Wördern and Vienna.