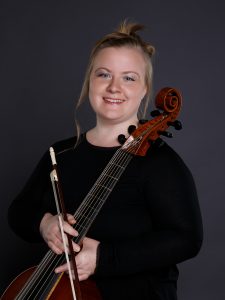 Born in Hartberg in 1981, she received her first cello lessons at the music school Hartberg with Mag. Inge Pfandner. In 1996, she moved to Graz University of Arts, Prof. Hildgund Posch, where she earned her first diploma in classical music in 2001 and her first diploma in IGP Violoncello in 2002. 2003/04 followed an Erasmus study in Stuttgart, after which she continued her studies in Oberschützen with Prof. Tobias Stosiek and finished with the Magister artium in 2004. Scientific curiosity led in March 2007 to work on a dissertation within the framework of postgraduate studies.

In October 2009 she decided to study the Baroque Cello at the Conservatory of Vienna with Mag. Jörg Zwicker and, since March 2012, the Viola da Gambe with Pierre Pitzl. She has also studied  with Christophe Coin, Patrik Demenga, Tobias Kühne and many others.