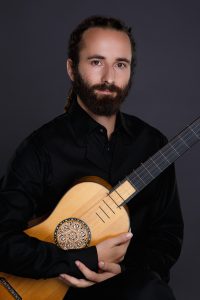 Born and raised in the idyllic Woodquarter, he was already dominated by a great interest in art of all kinds and media at a young age.
After a short excursion to the study of Human Medicine, he decided to pursue an academic career in music.
On jazz and popular music (with Wendinger Wendlinger) followed contemporary classical music (with Dr. Gunter Schneider), and again the early music (with Dr. Luciano Contini). During his studies, he gained a lot of experience as a lutenist, guitarist, arranger, composer and teacher.
He performs with various ensembles and orchestras in the fields of ancient, new, improvised and jazz music. Collaboration with contemporary composers is just as much a part of his artistic work as researching and transmitting historical manuscripts and working on interdisciplinary projects (literature / film / performance / theater / music).

Klaus Haidl is a prizewinner of various international competitions and awards in the areas of music and film.